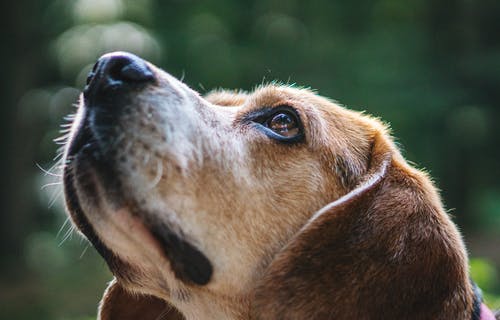 No matter what breed of dog you have, there is one common quality they all share. Their incredible sense of smell! Their ability to pick up on even the faintest scents has allowed for their survival for hundreds if not thousands of years. It has also allowed them to be utilized to assist humankind in tracking and retrieving game, locating missing people, detecting diseases in people, and finding illegal substances, such as narcotics.

How Sensitive Is Their Nose?

Animal care specialists and dog owner, Jen Eleao, explained that a dog’s sense of smell is somewhere between 25,000 to 100,000 times more acute than ours. This is due to our fur-legged friends having up to 100 million sensory receptor sites in their nasal cavity compared to six million receptors in people. The area of the canine brain devoted to analyzing scents is about forty times larger than the equal part of the human brain. “Our dogs are full-blown scent detection machines,” Eleao explains, “which is why they are capable of tracking even the faintest scent for miles.”

How Their Scent Detection Works.

Unlike humans who inhale and exhale at different times, a sniffing dog’s nose is designed to allow air to travel in and out at the same time, creating a continuous circulation of air. By keeping a continuous flow of air entering their nose, they are capable of maintaining a steady track of what they are looking for. A dog’s nasal cavity is divided into two separate chambers and opens into two nostrils that move independently, and that can take in smells separately. As a dog sniffs a scent, particles and compounds are trapped in the nasal cavity while the dog’s scent receptors process them. Part of the inhaled air goes to olfactory analysis, and some of it goes to the lungs to breathe. As a dog exhales, fresh air enters the nose through the slits in their nose, which maintains a steady stream of air and odors flowing.

Although all dog breeds are scent specialists, some are better than others. As an example, Eleao explained, although any dog can track the scent of common foods, such as poultry, hound breed dogs have the overall best sense of smell and are able to track just about anything that gives off a scent. Hound dogs rely on their ears almost as much as they rely on their noses. As they smell the scent on the ground, their ears are used to move the air in front of their nose and essentially lift the scent. Smaller dogs such as the French Bulldog and Pug that have short faces may have compromised airways that could affect their overall sense of smell.

Question: How Far Can A Dog Smell Something That Is Traveling Through The Air?

Answer: Generally, most dogs are able to detect scents in the air that originated several miles away. One study showed that some dogs could smell something (with the right airflow) more than ten miles away. A dog smelling something several miles away is comparable to a person smelling a juicy hamburger or chicken cutlet being grilled one block away.

Question: What Does It Mean When People Say Dog Smells In 3D?

Answer: The same way a human uses two eyes to obtain two different views on what they are looking at, which allows our brain to form a 3D image, dogs use both nostrils to create a 3D view of a scent. This allows a dog to determine precisely where objects are located that are giving off a scent.

Question: Are Dogs Used In The Medical Field To Detect Diseases?

Answer: Numerous studies have shown that trained dogs are able to detect a variety of diseases, including lung, breast, ovarian, bladder, and prostate cancers within the human body. There are current studies taking place to determine if dogs are also capable of detecting Covid-19.

Why Are Dogs’ Noses Wet?

A dog’s nose contains special glands that secrete a layer of mucus in the inner lining of it. The wet lining creates particles in the air to stick to it, which allows the dog to not lose track of the scent.